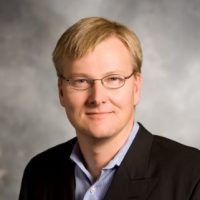 John Derrick, CEO of SkyWriter, sits down with (JP) Jeffery Potvin to talk about entrepreneurship, investing, and shares fundamental advices for founders and CEOs.

A global technology executive for private or public companies that leads with a measurable and quantitative methodology that has lead to multiple exits as CEO, turn-arounds at public and private companies, and multiple additional exits as an advisor / interim CEO.

The key strengths and skill sets that I use to grow, transform, or turn-around a business – •Strategy, Communication, •Execution. In other words, figure out where to go, make sure everyone knows where you are going and wants to go with you, and then do everything necessary to get there.

The strategy and operational plan is always based on Market, Product, and Team. Once you have a strategy and the right plan, execution is truly everything.

Extensive global experience having sold products worldwide and led organizations with large teams in US, China, Ukraine, Russia, India, UK, Portugal, Poland, France, and Israel. A key strength has been an ability to adapt existing technologies / products and sell them into new markets such as China (US product) and the US (non-US product).

Jeffery: Alright, welcome to the supporter’s fund, ask an angel. I’m your host Jeffery Potvin and let’s welcome our investor today which is John Derrick. Welcome. we’re very excited to have you here today john. I know we’ve had numerous conversations. I’m a big fan of all the things you’ve been doing and have done and what you’re going to probably end up doing, which is, who knows the future is going to hold a lot of bright things. I’m sure especially in the deep tech space but I think the best way for us to kind of start off and kick things off is I’d love to have you share a bit about kind of your past, where you’ve come from the things that you’ve kind of worked on through Yale, all these great things that you’ve done and I don’t want to list them all off because I’ll take away all the thunder but I know you’ve done a lot of great things. so please share that and then a little bit about where you are today and then one thing about you that nobody will know.
Derrick: Okay I’ll have to start thinking about that as I’m starting to talk. I’m gonna have to keep it somewhat secret so that it’s still something I’m okay with you guys knowing but that’s okay. I’ve been doing tech stuff now for about 30 years. I’ve started my career out actually as an electrical engineer, deep text-based doing radar systems, mathematics things like that, joined IBM, did about eight years there, lots of different shipping products, 19 patents at IBM, and then left IBM in 99. I started a company, raised about 5.3 million, sold for you know 10x that, something like that. and within 18 months went to venture funds and worked with a bunch of other companies. I started a second company. We sold that to intel. I went to California, led an IP semiconductor company, and grew that as a quickly public company, and then you know led about three other startups as the second CEO with another exit involved in all that. Additionally, I am always looking for something new, something challenging, to fix the puzzle, solve the solution. I always advised a bunch of other companies through that whole process. So I’ve also advised a few dozen different companies as a consultant, advisor, and board member, served on the board of intel capital investment for example, and software-defined radio among other things but about five or six other additional companies I’ve worked with. I have also been acquired through the years by Arm Netapp, Qualcomm, VMware, and others across all kinds of different spaces, so everything from material sciences, haptic devices, company cards by Chemist to pure software things required by VMware. so that’s a quick background. I have done diligence for literally hundreds of different companies across 20 or so different VC firms through the years, corporate and also just pure financial VCs.

Jeffery: amazing. so you pretty much spend a lot of your time, almost all your time in deep tech but also coaching, mentoring, and helping other companies work through the ecosystem at the same time.
Derrick: yeah. I would say the ratio between companies I’ve assisted to companies I’ve led has usually been six to one because I’m always mentoring, advising, and helping some other first-time entrepreneur coming out of, you know, some research project at Yale. a lot of things that they do I don’t fully understand. I mean I got a grasp of it. I don’t fully understand it. I understand it enough to give them advice on how to build your business, what do you need to worry about and how do you mitigate risk in terms of your funding or your productization of your technology. and so I enjoy that aspect of it. but at the same time, I have to have a full-time gig as well. Right. So, I do those as well. So you know technically, I guess at this point, probably have something that normal people might equate to three full-time gigs plus a few more but that’s fine. I enjoy that. so it’s all good to keep yourself busy. I like the 19 patents leaving IBM in 99 kinds of like the Gretzky thing so a very similar look which I like that I’m going to retire in 99. After all, I don’t know 8 million awards and 999,000 goals.
Jeffery: I think that sounds like the same structure before you left IBM.
Derrick: well I say I hope it’s not abnormal but I like to do new things period. I like to optimize. I like to make things happen that people don’t think can happen. That’s the key part of being an entrepreneur. But hopefully, in the process I figure out how I can make some money as well, whether as an investor or an entrepreneur or advisor or whatever.
Jeffery: So I think that’s a great approach. How much of what you learned and jumping into IBM helped you from that machine side of things? IBM has turned out many amazing entrepreneurs especially in the deep tech space. I know many people that have gone through the engine, the IBM engine. how much of that structure and learning do you think helped you and propelled you over the last well 22 years give or take?

Jeffery: I love it. Well, John. I like to end the show by giving you the last word on things that you want to say to the investors of startup people. and you’ve done a great job by actually doing that now. so I don’t even need to use that line but I appreciate it. Thank you very much for that. optimize your value. You said a lot of valuable things. I appreciate your time again John. Thank you very much. Awesome.
Derrick: Great. glad to share it and look forward to talking more. Bye guys.
Jeffery: Okay that was John Derrick. a lot of great stuff there. I liked his journey. he’s done a lot of great things in the entrepreneurial space not only from building companies, working at IBM, filing 19 patents by 99 but just the sheer value of and you use that a lot of value finding value expanding, building products in the business that can bring value and solve problems. he’s done a lot of great things. you gotta understand yourself. I think that was a real key point: figure out who you are and then figure out what you’re trying to solve and then build a team around that and understand how that team’s going to do it. Commercialize, learn how to commercialize your product. He does that a lot working with lots of different startups and businesses. He has a vision. understand how to execute the vision and then commercialize it. I’m starting to love that commercialization piece because I think it’s going to make a big difference in how businesses and startups look at everything. Thank you again for joining us today. If you enjoyed this conversation, please subscribe to our YouTube channel and follow us on Spotify, Apple Podcast, or Stitcher. You can also check us out at supportersfund.com or for our startup events visit opn.ninja. Thank you and have a great day.

Are you interested in meeting John, we will be happy to make an introduction!