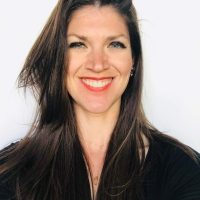 "So, part of the layer of it to me is making something that advances the conversation and makes it less taboo and generates healthy conversations."

I was born and raised in West Texas, began working at age 14 as a receptionist in my dad’s dentist office. I also shadowed OBGYN doctors where my mom was a nurse. I was pre-med at Texas State University. I graduated with a BS in Biochemistry, MS in Philosophy, minor in Spanish through study abroad. I joined the Biochemistry PhD program at UC San Diego as a researcher in Dr. Pieter Dorrestein’s lab, where we studied interspecies communication of the microbiome and developed novel mass spectrometry techniques. I left the PhD program after completing an MS.

I then joined Impossible Foods when it was less than a year old, as the 12th employee. I worked in R&D and product development to help develop and launch the Impossible Burger. I learned a lot about developing novel products with potential for massive positive impact, while working with top biochemists and enjoyed cultivating a company culture. I worked with Impossible Foods for 6+ years, from idea stage up through public launch.

I went on to complete an MBA at Presidio Graduate School that focuses on sustainability and impact. I consulted with over a dozen early stage startups in the Bay Area and internationally on product strategy, R&D integration, and financial modeling. I deepened my understanding of the innovation process, team formation, and startup financing.

I began to pursue my lifelong dream of investing. All of my former angel investments have become unicorns (Impossible Foods, Opentrons, and Public), where my thesis was consumer products that are tech-enabled and have positive impact in antiquated industries. I helped build the investment strategy and operations for Adrian Grenier’s impact-focused VC fund, DuContra Ventures. It was here that I diligenced deals in women’s health and sexual wellness, and became completely obsessed. I understood the marginalization of women’s health and wellness, including sexual wellness, to have a direct impact on gender equality. I knew then that this is the most important thing I could be working on.

I founded Coyote Ventures with Dr. Brittany Barreto in 2021. Our thesis is to invest in early stage companies innovating in women’s health and wellness. We fund the launch of impactful products and technologies that improve all areas of women’s lives, and strive to advance conversations around taboo topics.

Are you interested in meeting Jessica, we will be happy to make an introduction!