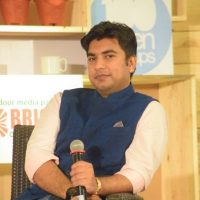 "Getting the right mentor is like getting a right life partner."

Devesh Chawla, CEO of Chatur Ideas, joins (JP) Jeffery Potvin to talk about his journey from an engineer into becoming an angel investor.

Devesh shares the struggles in starting a business and emphasizes the importance of mentorship at the early stage. That despite the challenges and distractions, one’s passion and inspiration will guide any founder to success.

Devesh shares his investing process and that before investing, he looks for the founder’s PDF: Perseverance, Discipline, and Focus.

Devesh Chawla is an ingenious strategist, a mentor, an investor, TEDx Speaker, an efficient leader and to sum it all, an all-rounder! A highly sought after speaker and yet a very good listener. He is known and highly regarded for his brisk planning and execution. He is deeply committed to add value to the start-up ecosystem and revolutionize the entrepreneurship picture globally. ‘Chatur Ideas’ is his heartfelt and sincere effort to create a ONE STOP solution for start-ups and entrepreneurs which he has successfully done.

He has worked with hundreds of startups including Catapooolt, Strike, Orbit Marketplace, Maax Market, Hubilo, Market Pulse, and many more. He also runs entrepreneurship programs across colleges and startups along with joint certification courses with IIT-B, Spinta Global Accelerator, USA, etc. with his trainers present across the country.

He has been felicitated with the “Youth Leadership Award” by the Trade Commissioner of Canada.

He has been awarded the “Mahatma Gandhi Samman Award” which is given to only 25 Indians all over the world.

He has also been awarded “Entrepreneur of the Year 2018”.

He has also been felicitated as “CEO of the Year 2019”

Are you interested in meeting Devesh, we will be happy to make an introduction!