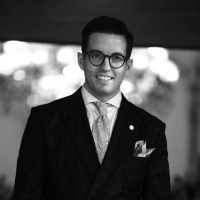 "What I’ve figured out over time, especially in early-stage companies, it always comes down to the people. Whether that's employees, co-founders, early-stage investors or the advisors you bring on the board, making sure that all those relationships are really sound and really tight is super important."

Chad Fox is a solo venture capitalist investing in and advising the best in class early-stage FinTech companies.

He has backed over 20 companies to date, personally and through Fox Ventures AngelList syndicate, and is currently raising a fund to double down on seed-stage FinTech. A reformed lawyer, Chad’s portfolio companies rely on him as a strong advisor and he works tirelessly to support their growth.

Jeffery: Well, just like we like to do man, we like to jump right into things Chad. So, thank you very much for joining us today at Ask An Angel. And to get started, we’re going to jump right into your background. Maybe you can share a little bit about your past, where you’ve been, where you’re going, and one thing about you that no one would know.

Chad: That’s a good one. So, I have a bit of an interest into the technology ecosystem and venture capital, angel investing space. I’m Canadian from Calgary. I left Canada about 12 years go. Moved over seas and got a law degree and basically looked for an emerging market that I could go to. And, basically learned Venture from the ground up. I ended up in the Middle East, in Dubai, where I spent 7 years first as a lawyer. And then about 4 years ago, that selling 6 – minute time intervals wasn’t a very good business model and that I didn’t want to go in and operate a company in. So, I left practicing law. It took kind of all my relationships on the company side and on the investor side and started Angel Investing and putting together syndicates. And because I was a lawyer, I got access to two things. One, good real estate companies came to me and wanted support advice. And the Angel Investor Community or Family Offices basically said that I had a good deal flow and I knew how to put together transactions and put together multitude ways to invest. And so, been doing that for the last four years. And invest only in real estate fintech companies. And something that no body knows is that during COVID, my wife and I have been in four different countries. We probably traveled more than most people. And a lot of people that I do business with still think that I’m sitting in Dubai and they are going to find out today that I’m not actually.

Jeffery: Well, you change the background then.

Chad: Its okay. We can let the cat out of the bag, as they say.

Jeffery: Well only because I’d have to ask, when you were going through these four countries, did every country have a different policy? Or did you have to quarantine for fourteen days in every different country.

Chad: So, we started in Dubai and then we left and went to Europe in about August last year. We stayed a couple months in Greece for the end of the summer. And then, we went to Lebanon for Christmas to visit family. And then we came to Canada. Fortunately, when we came to Canada, it was nice because we came in on the pilot program. We didn’t do the fourteen-day quarantine. We had three days just with lots of tests. I think over that Christmas period, we tested something like 9 times in two weeks. We knew we were safe while everyone else were running out of water.

Jeffery: Whoa. That’s a lot of testing. I had no idea it was that strenuous.

Chad: I just had to test before and after every country. Not too bad.

Jeffery: That’s awesome. Well, I want to touch back on that pivotal moment where you went through and became a lawyer then you started to work through this and you decided that this is not working for me. I need to get into more of this Venture Capital Side. What was that changing moment? You mentioned you just didn’t like the 6-minute calls and the 6-minute value. You’re still utilizing that skill that you built. So what was that metamorphosis that changed in you? You know what, this is the space where I want to be. And was it a start-up that just blew your mind? Or was it the whole space you’d been in for the better part of the last 10 years.

Chad: I’ve always been in the Venture Space. I started looking at business models and I figured out that I didn’t like the business of Law. That was the first step. I guess when you start looking at that business of being a lawyer. My options were two-fold. One, I can either try to change that or I can leave the profession. What I first did, I took all of my clients, quit working at a big firm and set out on my own. What I figured very quickly from there is I was effectively picking my clients as if there were an investment because I was a solo lawyer. I had limited amount of time. I didn’t want to build a big platform. Very similar to what I do today as an Angel Investor. I had to pick the clients that I wanted to spend my time with so I was effectively making an investment. And then over time you know I kind of got to the point where I was like, okay I’m the only one that doesn’t own shares in these same companies that I’m doing these deals for and I’m helping them and building value. So, I initially okay started writing small checks. I first started doing small checks, $5000 – $10,000 maximum. But then I would also do some sweat equity so I’d give them another $15,000 or $20,000 worth of services and it went well. As the number of companies grew, I had a decision to make if I wanted a larger portfolio or stay concentrated. And then the other thing was that I was kind of spreading myself too thin so I wasn’t able to give the same best advice. So, what I figured out was the companies that I like to invest in can come to me for that quick advice. I can still be very hands-on but when we need heavy lifting on a legal investment round or heavy lifting on contracts it’s still probably a better use of everybody’s time and money to go and hire a law firm to do it. And so that’s effectively what I do now. I get access to really good early stage founders because i can actually add some value and then I help them in that seed to series to manage their legal spend, to raise capital and to make sure everything’s set up right. And I sit on the cap table and build some value and go from there. So that’s kind of where we are today.

Jeffery: Awesome! That’s a great story and a great way to jump into companies. So, while you’ve been working in these companies what kind of things do you see as things that would stand out as red flags for founders. Say, “Hey, here’s some real hot items that you should think about when you’re building a company that maybe people just overlook because they’re new.
I can’t stress that enough where you’ve seen co-founders having an issue, brea
Chad: What I’ve figured out over time, especially in early-stage companies, it always comes down to the people. Whether that’s employees, co-founders, early-stage investors or the advisors you bring on the board, making sure that all those relationships are really sound and really tight is super important. king up and causing the company to implode. You know they pick the wrong Angel Investors or don’t have that structured properly which then a VC comes in and says this is a mess and can’t really fix it. Same thing with advisors giving them too many shares not doing vesting. So, making sure that all those relationships are really tight at the beginning, I think, is something that is super important to me and something that I try and help a lot of early stage companies get right from the beginning. I always told the companies when I was a lawyer that it pays to take this seriously now because if you come to me three years down the line, I’m going to end up charging you three times as much or it’s going to be three times as painful to do that. That’s kind of the biggest thing, to have those relationships tight at the beginning.

Jeffery: Agreed and I’m sure that you’ve seen this many times and founders go through this quite often where they have to try to restructure and fix a lot of the documentation that they didn’t create. Is there again some recommendations on, three things from shareholders agreements or employee agreements that stand out? And I’m hitting your legal side because this is not a common understanding, I think that a lot of startups don’t get and I think uh utilizing your skill is pretty key to this.
Chad: I think the biggest thing is just to do it. A lot of founders try and push it down the road too far because they think it’s going to be expensive. Now, there’s so many
free or low-cost places that you can get standard documents and it’s always a good place to start. What I always tell founders is that it’s better to have something than nothing even if it’s you know with your co-founders. When you sit down, when you go, even the back of the napkin conversation where it’s like okay, ‘Here’s your step, here’s your role and here’s my role. You know we’re full-time or we’re not. We agree that we’re going to vest our shares.’ It is something that I like to use with everybody whether that’s you know founders, advisors, or early employees. So that if they do end up leaving or you have a disagreement that an early person can’t hold up the company or at least if they vested, they lose voting rights if they’re not part of the company. So, the biggest advice is always just to get it on paper. It doesn’t have to be perfect. Contracts are always a working document or a living document. They can be changed over time. There’re standards in every country of incorporation whether it’s with certain associations doing it. Some law firms offer it. There’s a ton of free resources on the internet and there’s no reason not to have it done.
Jeffery: For the for the vesting part of it and I do think this is important especially if you’re going in as a co-founder, do you look at one co-founder in a business or multiple co-founder? And then the follow-up to that is maybe you can explain more of what vesting shares means.

Are you interested in meeting Chad, we will be happy to make an introduction!