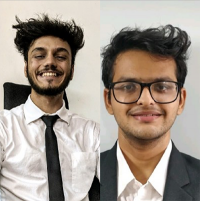 "A collective global approach is being taken so that we arrive at a certain level much faster. And then, in a more collaborative way, we can all benefit from it and not just have silos built."

Unlike the usual episodes of Ask An Angel, Jeffery takes on two phenomenal men ushering in a young understanding of the new world of tech. Hailing all the way from India, Abhinav and Neel share their knowledge and understanding about Web 3.0, Decentralized Finance, and many more interesting topics that would open doors to opportunities in the startup space.

The combination of Neel’s background in Finance and Tech with Abhinav’s interest in research and blockchain, brought their paths together in Woodstock. Our guests will walk us through the spectacle which is Web 3.0, and how this is opening new developments and innovations in the start up space.

Abhinav Pathak
I am a blockchain, finance, and economics enthusiast, currently working at the intersection of these fields at Woodstock Fund. I am passionate about photography and football, having been involved in them actively for over 10 years now.

Neel Daftary
Finance, Economics and Business enthusiast with a Bachelor of Engineering in Electrical and Electronics Engineering from Birla Institute of Technology and Science, Pilani.

Are you interested in meeting Abhinav Pathak & Neel Daftary, we will be happy to make an introduction!