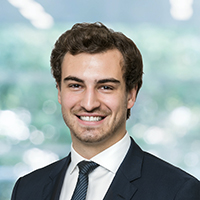 "Do something you're passionate about. And it's both from a founder perspective and from an investor perspective."

Tobias Bauer on Outside Perspective.

Entrepreneur, venture partner, ecosystem builder, and mentor Tobias Bauer shared some cool pieces of advice that can help founders in the early stages. The importance of a strong vision, passion, and the right mindset are among his key points. To not always make it about the money, but rather why you’re building a company, why you’re solving a problem, and why people will seek out your solutions.

In addition, Tobias suggests seeking out coaches, advisors, and people who have been there before. By working with these people you can move through the whole process quicker.

Tobias Bauer 托比亚斯 is the Principal at Blockchain Founders Fund which invests in and venture builds top-tier startups. He is a Startup Mentor for 500 Startups, APX, PlugAndPlay, NUMA New York, Alchemist Accelerator, and a Venture Partner of Republic.

He worked in the investment team of Chinaccelerator, one of the global elite accelerator programs operated by the venture fund SOSV with $907M+ AUM in China.

Furthermore, he worked for the German Government in Thailand where he co-organized the NSTF, a career fair with 1.1M visitors, in order to enable students to build their professional career. In the past, he has lived in 9 different countries across 15 cities and is fluent in Mandarin Chinese, English and German.

Are you interested in meeting Tobias, we will be happy to make an introduction!